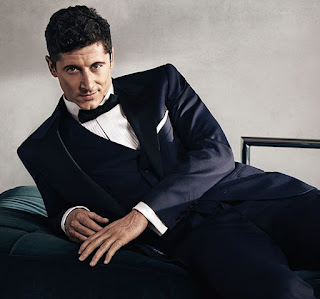 The nine. The finisher. The poacher. The goal scorer. El zorro en la caja. In these days of false nines and wide forwards, there is a crop of men - so manly, so dashing, so cool - that they could only be center forwards. It's on these players that a team will rest their goal scoring hopes.


You're probably getting at least one of the top five or six names in that group on to your fantasy team. If you bring in an OMAC, you're probably looking down the list for value. Falcao is particularly interesting to me. He's in teammate James Rodriguez's shadow this summer, but is back to form in Monaco after a few years of injury recovery paid for by some of England's bigger clubs. If Colombia can live up to their well-earned entertainers reputation, Falcao will be banging them in.
4 comments 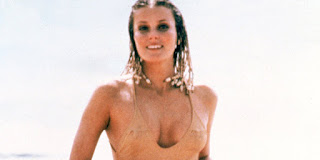 The OMAC is the player you build around - in real life, and in fantasy. The nine is your Golden Boot hopeful. But the ten... the ten is something magical. The attacking midfielder. The small, skillful player directing his teams forward play, taking set pieces, and finishing moves. They may play off a striker, or behind a pair. They may be a false 9, but especially come the World Cup, these are the players the hipsters love, and at whom scouts can't throw enough money.
I'm all-in on De Arrascaeta. He's hopefully a cheap in to a Uruguay attack that should score buckets in a historically bad group. He counts against a forward spot, but if he can set-up Luis Suarez and Edinson Cavani - or be set up by them, as happened in their most recent friendly - he could be a productive player in his own right, and enable you to afford big hitters elsewhere in your squad.

Hakim Ziyach and Christian Cueva, would complete my bargain tens. My (playing at the tip of the) diamonds in the rough.
0 comments 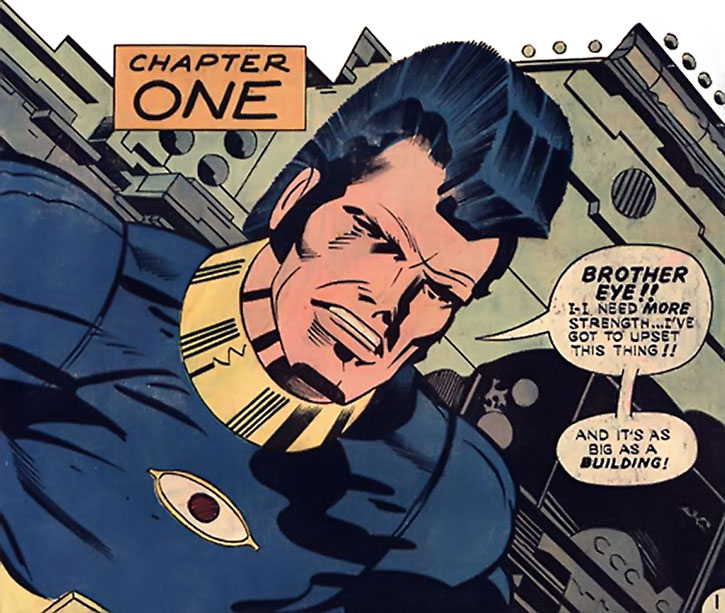 My first category, and the one you should look at first, is OMAC: One Man Army Corps. These are the players around whom their national teams are established. These are the rare few players who coaches construct systems around and who will be expected, indeed needed, to lead their teams. Needless to say, these players will be the most expensive, but still the most heavily owned players in the game.

Probably no surprises here. Eriksen is interesting. He's the only one on the list classified as a midfielder, and by far the cheapest of the lot. As such, I think he's a must own. If you want to squeeze one of the big fish into your team, I would suggest Neymar. Hopefully he's fit. He's definitely rested. I think Brasil are the most balanced team of the three (Brasil, Argentina, and Portugal) and there seems to be an enthusiasm in that side that the others are lacking.

Mohamed Salah might have made the cut were he healthy, and maybe he is. We just can't take the chance in round one. I would have also considered James Rodriguez, Sadio Mane, Robert Lewandowski, and Antoine Griezmann. Griezmann especially has a Golden Boot ceiling, and would have made the list if I thought Deschamps was a little more committed to him.
0 comments 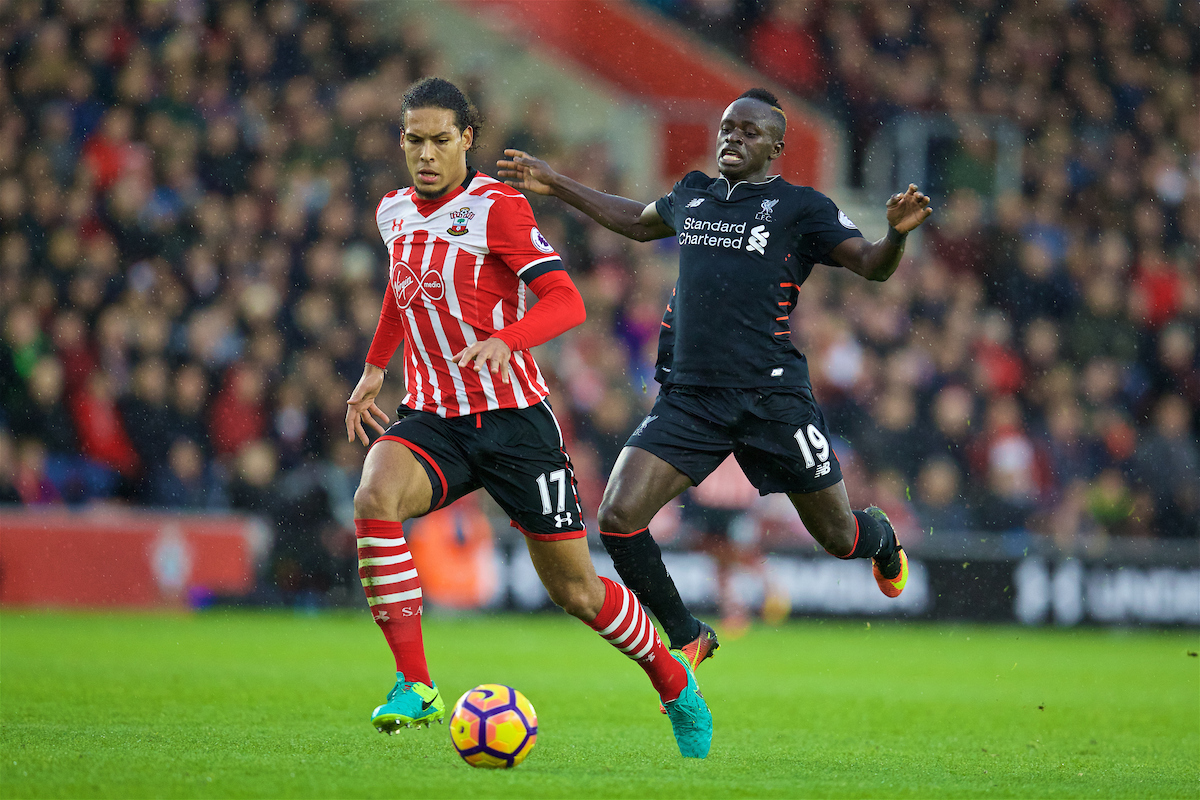 
With the news that Virgil van Dijk's long-anticipated move to Anfield is becoming a 75-million-pound reality, we thought it would be fun to come up with a Premier League all-ex-Saints eleven. We'll line up in a 4-2-3-1, as is the fashion, and see if we can fill a bench as well.


Goalkeepers
We're going to bring two keepers out of retirement for this team. Tim Flowers gets the nod because he was sold by Southampton to Blackburn Rovers for a then record fee, and he went on to win the title. Paul Jones is on the bench because he was loaned from Saints to Liverpool, which is just too perfect for the purposes of this list.

Defenders
These names are pretty obvious as top clubs have bought most any good defender Saints have developed - the majority to Liverpool. Nathaniel Clyne and Manchester United's reclamation project, Luke Shaw, are the fullbacks We'll let West Ham man Jose Fonte partner Virgil van Dijk for variety's sake. That will leave Dejan Lovren on the bench, as he's found himself for Liverpool, and will expect to be going forward.

There's been some shouts for Toby Alderweireld to be included in this team, and oh boy would we love to do it! He's the best center back in the world for our money. However, he was a Saint on loan from Athletico Madrid, and as such, we're going to have to pass. It's like a competition where a less-qualified candidate advances because the one who should have won violated some stupid technicality that no one really cares about. But rules are rules. Even the rules one makes up on the fly.

Midfielders
Our holders are Morgan Schneiderlin and Jack Cork. Who would have thought the latter would be having the better post-Saints career? That's 2017 for you. The attacking trio is a Liverpool clean-sweep with Adam Lallana, Alexander Mark David Oxlade-Chamberlain, and Sadio Mané starting. Andrew Surman, though he never played for Saints outside of the Championship, takes his place on the bench. Victor Wanyama should clearly be in this team. We'll leave him on the bench because of his current injury, and not because it was easier to edit that way. Nope, definitely the injury.

Forwards
We've given the lone-forward role to Theo Walcott, who incredibly moved to Arsenal eleven years-ago! He'll be coming into his own soon enough. He'll have to perform though, as we've got competition for the role. Jay Rodriguez, now of West Bromwich Albion can play center-forward, or cover for the attacking-midfield. Then there's Rickie Lambert, Southampton legend who moved to Liverpool and then to West Brom himself. He's available on a free now, having been released by Cardiff City, and that is well enough for our squad.

Gareth Bale gets his name in this team as soon as the ink is dry on his Manchester United contract.

I think we can be safely mid-table with this squad, and if things go right we can challenge for Europe. Kind of like a certain selling club on the south coast of England. Don't you think?
1 comments 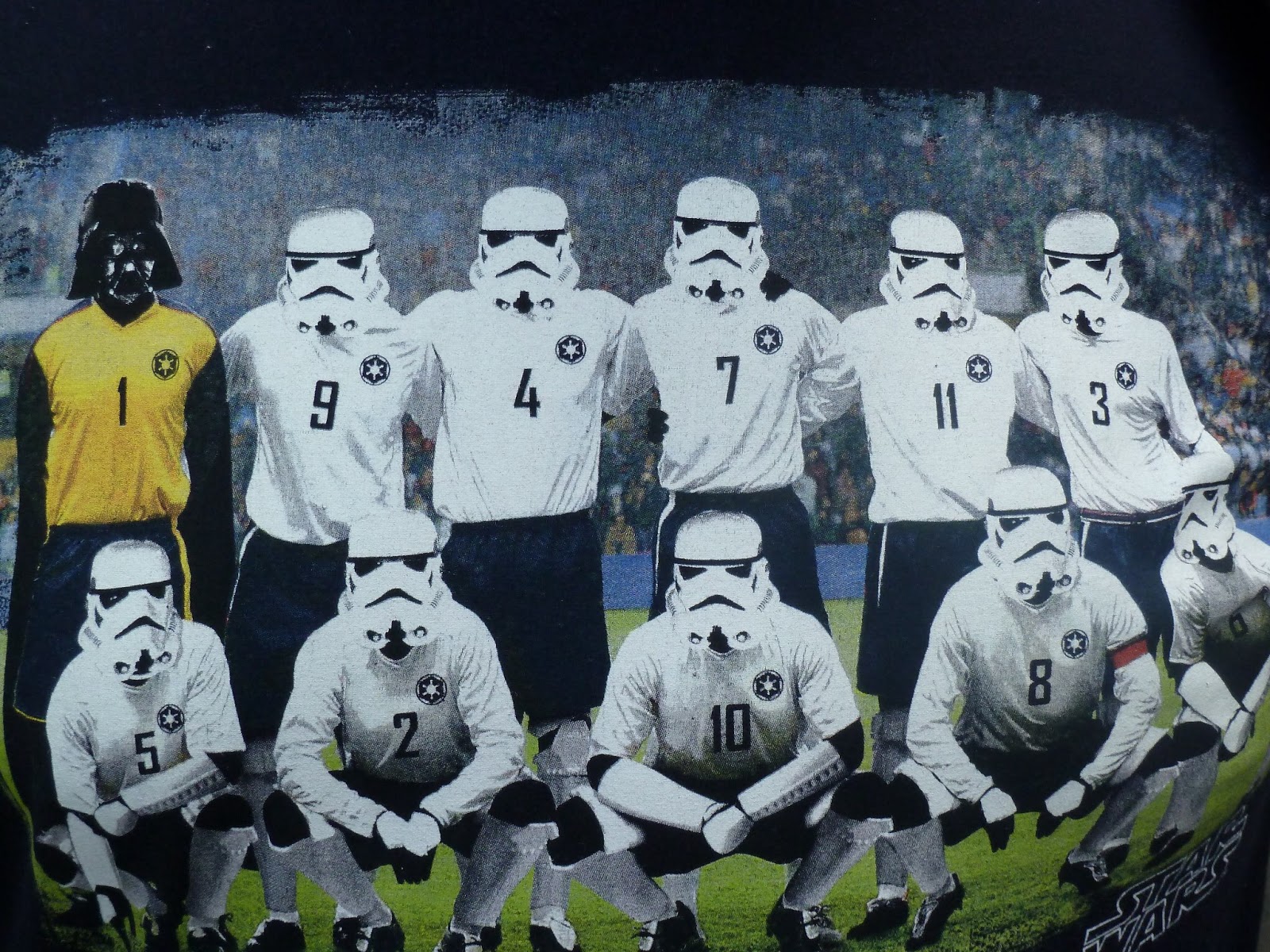 A long time ago in a social media platform far, far away.


Here's what we have. Feel free to add more in the comments. Thanks to @FantasyYIRMA, @FantasyGaffer, @jbullDFS, @alstra78, @wrigavin, @Nutk1ns, @JamesMartin013, and anyone else I may have missed.

The team would play at the Vicente Alderaan Staidum, and be managed by Gerardo Daniel "Tauntaun” Martino. Obviously, they would look to play with X-wing backs, and Bothans would be in charge of scouting the opponent.

In defence of Big Sam


My colleague and friend, Neal Thurman (formerly of these pages), had this little nugget buried in his Monday Morning Manager post:


"As much as I appreciate what Big Sam accomplished at Bolton back in the day, it seems like a poor fit of manager and roster. The Black Cats are handing a roster full of attacking midfielder-types to a guy best known for blood-and-guts football."

Neal, you're talking about a manager who ran out Jay Jay Okocha, Youri Djorkaeff, Stelios Giannakopolis, etc behind (pun intended) the not-inconsiderable backside of Kevin Davies. At West Ham, he converted Stewart Downing from a winger to a (temporarily, at least) surprisingly effective number 10.

Big Sam has a plan, and works that plan to a hard edge. It may not always be pretty, but sometimes it can be.

At Sunderland, he has some talent in the likes of Jermaine Lens, and Yoann M'Villa. He has the target-forward he likes in Steven Fletcher. And while Bruno N'Gotty isn't walking through the door, he's got... well, maybe the less said about Sunderland's defensive options the better.

I'm not saying that Sunderland are poised for a run at the European places, but Allardici is a good manager who has done more with less in the past. I'm fascinated to see what he can do with the Black Cats, starting this weekend against Newcastle, who may have just had their own dead-cat bounce against Norwich.
4 comments


With the news that Sergio Aguero has injured his hamstring playing for Argentina, we turn to Twitter, the internet's id, to demonstrate fantasy managers going through the classic five stages of grief.
0 comments


Has anyone broken the news to them?

Amidst all the, justified, excitement around Jurgen Klopp's appointment as Liverpool manager is one thing I haven't heard. How do Liverpool fans - not ones to give up on their image of the club as a premier destination - feel about Klopp's deigning to take the job in the first place?

“I’m really very relaxed – but only because I know that is how it goes sometime. I’ll be back to train a team. It must be somewhere in the world that is not an absolute top club, there are other good projects that are exciting who need help.”


"not an absolute top club"

Really? And Liverpool fandom is accepting of this? It seems to me that some of their most fundamental self-images (Delusions, if you're being mean. Which I'm not.) are being challenged.

Robin Van Persie is not impressed


It seems as if the ex-Arsenal, ex-Manchester United star isn't happy with his lot in life with Fernebache. Here he is, on the bench, "celebrating" one of teammate Fernandao's recent goals:

I don't know why it's gone wrong for him. Maybe he's just past it. Maybe all those injuries didn't save his body from wear and tear - the theory when he was healthy and scoring - and he can't compete physically anymore. Maybe he's just missing London. If that's the case, I have a wonderful idea! I know he'd probably just end up at Chelsea on a loan back to the Premier League. It's just the sad way things work. But they already have a Falcao-batross (™ © ® Jeremy Spitzberg) around their collective necks. The last thing they need is another reclamation project.

However, no such baggage weighs down the Eagles of Crystal Palace. Hear me out on this.

This January, Chelsea recalls Patrick Bamford from his loan spell at Palace. He's not getting any playing time there anyway so that is helping no one. Bamford, with youth on his side, and a chip on his shoulder, immediately becomes second choice at the Bridge behind the oft-suspended Diego Costa (27? You're having a laugh!) and we finally learn whether or not he's good enough for Chelsea.

Making that possible, is Robin Van Persie's loan to Palace. He is miles ahead of the other options like Gayle, Campbell, and Wickham. His movement (albeit slowed by time) allows Palace's other attacking players new, and more dangerous lanes to... attack. His finishing turns chances into goals. Humbled by his travails in Turkey, he's a team-player, deferring to Yohan Cabaye, and the other leaders already at the club.

There! It all adds up!

Sadly, porcupines are allergic to raisins.


I do love this photo.

FPL Scout Extra: Chips should be held despite Aguero heroics


Hopefully, you don't have any of these players in your fantasy side:


Of course there's a lot more about Jurgen Klopp to Liverpool. Today's trend is pragmatic, leaning towards pessimistic. Yes, he's a great manager, but what about the players and what about the boardroom?

Finally, ESPN FC has an interesting, side-by-side look at the Milan clubs.

I'm intrigued by the notion of Inter "zigging" when others are all "zagging". Are we seeing a return of the colossus midfielder? The Patrick Viera, Roy Keane type? Arturo Vidal... Nemanja Matic... Paul Pogba... Blaise Matuidi... Moussa Sissoko...

Wow, the French are stocked in the middle of the park! Throw in Yohan Cabaye and Morgan Schneiderlin for good measure and you're looking at a collection of players that would be the envy of any manager - international or club.
1 comments